As many of your know, Dexter Industries has build custom software for our robot kits! These robots are all based on the Raspberry Pi, that awesome little credit card sized computer that we’ve turned into robots. Raspberry Pi has software called “Raspbian”, and our version of it is called “Raspbian for Robots”.

We’re excited to announce a totally new and improved version of Raspbian for Robots! We’ve listened to all the feedback from customers, and gone through a lot of user testing on different devices in order to build something that is easier to get started, and more fun to use every time you pull out your robot. We’d like to show you some of the improvements, answer some questions, and make sure you have all the information you need to get up and running with the latest version!

What is Raspbian for Robots?

Raspbian for Robots has some improvements for robotics and comes with all of the Dexter Industries software installed.  It cuts out all the setup and installation steps for using the BrickPi, the GoPiGo, and the GrovePi.  We’ve written some custom software that makes it easier to use Scratch, easier to connect to the Raspberry Pi from a computer, and easier to find and use examples.

Our update comes from almost a year of intense work with educators, beginners, and experience programmers to make it easier to connect, and easier to start coding Raspberry Pi robots like the GoPiGo, GrovePi, and BrickPi.  A few of the improvements we’re really proud of include:

In the past, we offered a few different ways to connect your computer to our robot kits so you could start programming.  We found that many educators can’t install software (like VNC) on their computers, and sometimes it can be tricky to find your robot on the internet network.

Now all you have to do is connect your robot to your computer via ethernet, and open up a web browser and type in “http://dex.local”. (note: If you are using a touchscreen laptop, be sure to use Firefox, otherwise your mouse won’t work!)

See below for full step-by-step instructions!

A Focus on Scratch

We’ve totally redesigned how you program our robots with Scratch. In our previous versions for the BrickPi, GrovePi, and GoPiGo, we found that getting started was a complicated process for some.  In our new software version, you can start programming Scratch on any of our robots with just a few clicks.  We designed a graphical user interface that connects Scratch directly with the robot, and makes it easy to find and try new examples.

We have completely redesigned the way you run updates, test your hardware, and manage settings on your robot. We’ve written custom software that makes all of these tasks fast and easy.

How to Get It

If you already have Raspbian for Robots 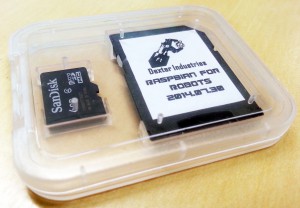 Make your own or update your old one.

Take the following steps to update to the latest software:

That should be it!  You’ll notice at the next boot, the icon should change from our old Claw icon, to our new Dex icon. 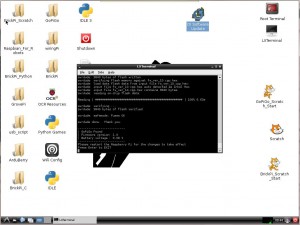 (**note: If you are using a touchscreen laptop, be sure to use Firefox, otherwise your mouse won’t work!)

You don't already have Raspbian for Robots, or just want to start fresh.

Getting Raspbian for Robots

If you don’t already have Raspbian for Robots, or want to start fresh, we recommend you install our new software.

We have directions and videos on how to download the latest version of Raspbian for Robots here, using a Mac or a PC.

You can login just as you did before (SSH, VNC, or with a good old fashioned monitor) or you can login with a web browser** pointed to “http://dex.local”, and use password: robots1234

(**note: If you are using a touchscreen laptop, be sure to use Firefox, otherwise your mouse won’t work!)

We would love to hear about your experience with our latest software, good and bad.  We are now updating our software a lot more frequently, and we’d love you, the user, to tell us what we can do better!

We’ve started a forum thread on the software here, so please let us know how you found it, and what we can do to make it easier to use!