GPS – The Dexter Industries GPS is a GPS unit manufactured for use with the LEGO® MINDSTORMS® NXT. The sensor calculates positional and navigational data. It then delivers latitude, longitude, time, velocity, angle of travel, and navigational information such as distance and angle to a specified destination.

Connect the GPS unit to the NXT using any of the four sensor ports.

Two types of data are sent back and forth between the NXT:

Navigational Data: The NXT may be programmed to send the latitude and longitude of a desired destination or waypoint to the GPS sensor.  The GPS sensor calculates the distance and angle of travel to the destination.  The sensor then sends the information back to the NXT.  For more accurate direction of travel data, the GPS can calculate an angle since last call.

A thorough explanation of conversion between coordinate systems can be found here: http://en.wikipedia.org/wiki/Geographic_coordinate_conversion

format.  Most mapping systems, like Google Maps, run on a format called
“decimal degrees,” where the output data looks like this:  dd.mmmmmm.

Because of NXT-G 1.0’s integer math limitations, the Dexter Industries GPS sensor sends and receives data in the format ddmmmmmm.  Therefore, data must be input into the GPS sensor in integer format (no decimals). 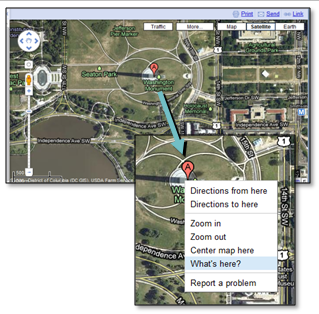 An Example with Google Maps

The NXT-G software is capable of communicating with the robot, telling where it is, how far it is from its destination, and what angle it must travel to.  For our example, we’ll select a destination for our robot—the Washington Monument in Washington, DC.

Starting the Hardware and Acquiring a Signal

The GPS unit connects to the NXT through any of the four sensor ports.

On startup, the GPS will begin searching for GPS satellites.  Depending on the location and the amount of horizon visible, the GPS may take up to a minute to find a satellite signal.  Acquisition time varies widely and depends on the view of the horizon, the time of day, and the number of satellites in view of your particular location.  For example, if starting in a position with no obstructions and a clear view of the entire horizon, the GPS can acquire a signal in as little as 30 seconds.  However, when part or all of the view is blocked, it may take the GPS longer to acquire a signal.  Before a signal is acquired, the GPS will begin sending the default location and time (121000000 E, 24000000 W) until a valid signal is locked by the sensor.

Starting the dGPS for the first time:

When starting the dGPS for the first time, it can take up to 10 minutes or more to acquire a satellite signal. On first startup, the dGPS acquires an almanac from the satellites.  This process can be sped up by taking the dGPS to an open space with as much of the horizon visible as possible (an open field, or the top of a building is ideal).  After the first startup satellite acquisition should be much faster, less than a minute, when in an open space.

The LED on the GPS unit indicates a valid GPS signal.  When a signal is acquired, the LED on the GPS sensor will turn solid.  If satellite signals are lost, the LED will turn off.  When a signal is lost, the GPS sensor will continue to transmit the location of the last valid signal.  The GPS clock will continue to operate and provide an accurate time.

When the sensor is disconnected or the power to the NXT is lost, the signal must be reacquired with maximum view of the horizon. 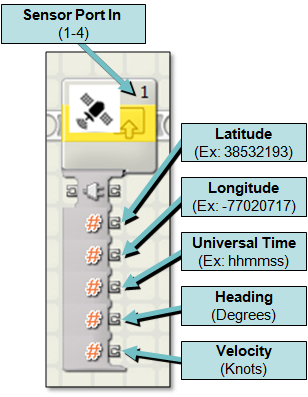 The GPS Read Block can be used to read position, time,
velocity, and heading.

Positional information is read by the GPS and returned in integer format. 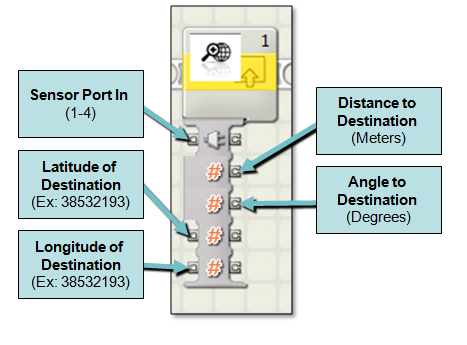 The GPS Navigation Block can be used to navigate
to a user-defined destination.  The destination is
defined by latitude and longitude in integer format.
To get a decimal degree, one can use a program
such as Google Maps.  (For additional information on Google Maps, see the Using Dexter Industries GPS Sensor and Google Maps tutorial.)

Coordinates are entered as integers.

The Angle of Travel is a function that reads the GPS 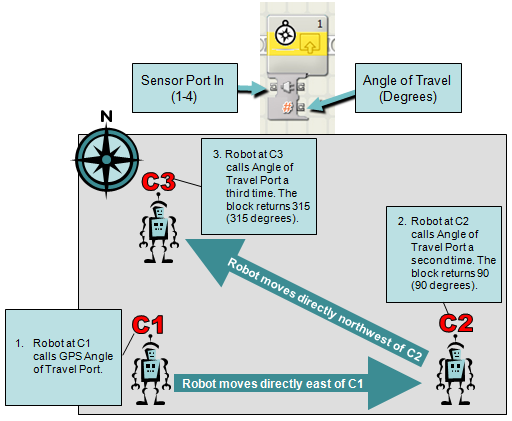 position and calculates the angle traveled since the function was last called.  When used over distance, this function can serve as a more precise compass than the GPS output.
Calling the function intermittently over travel distances greater than 10 feet will give a more accurate compass reading.

The function works as follows:

The diagram below depicts a very basic NXT-G program using the Dexter Industries GPS Sensor.  The GPS Read Block is used to obtain the time, latitude, and longitude and to display these values on the screen.

The NXT communicates with the Dexter Industries GPS sensor via I2C.  The NXT sends seven bytes of data to the GPS.  The first three bytes tell the GPS what type of data to send back to the NXT.  The last four bytes are reserved for latitude and longitude of a destination.

I2C communications are diagramed in the figure below.  A complete list of I2C calls are tabulated below. 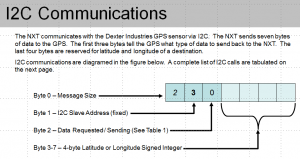 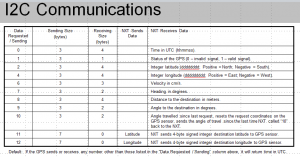 If you received your dGPS from Dexter Industries after June 2012, you should have the dGPS-X software.  The extended firmware commands must be turned on before using them.  Turning on the extended firmware can slow down the dGPS sensor, but provides more detailed information such as altitude, HDOP, and satellites-in-view.

What is the accuracy of the dGPS?

The dGPS uses a single commercial GPS receiver and can attain an accuracy of 3 meters.  This reading is highly dependent on the number of satellites in view, obstructions to the sky, and other error-causing phenomenon.

Because of geometrical complications, GPS receivers are less accurate in measuring altitude and measurements are frequently 10 meters or greater.

What is the Maximum Altitude of the dGPS?