Scratch Programming for the PivotPi

Scratch Programming for the PivotPi

Dexter Industries’ Raspbian for Robots operating system allows you to program the PivotPi , a Raspberry Pi-based servo controller, in Scratch without any special setup. This page will walk you through how to program the Raspberry Pi Servo Controller in Scratch.  You will be up and running in no time!

One PivotPi and up to 8 servos are supported!

Things to Know Before Starting

PivotPi with other Dexter Industries Robots

When double clicking on the Scratch icon on the desktop you are presented with a “Scratch for Robots” dialog where you can select your robot.

However if you use it in conjunction with another robot, you need to select that other robot. For example, if you wanted to control the PivotPi and the GrovePi you would select “GrovePi”.  For a GoPiGo+PivotPi combination, please select the GoPiGo option.

The PivotPi commands can be accessed through all our robots.

There are basically two Scratch commands that you can send to a PivotPi board :

All PivotPi commands start with the word Pivot. Any other command – not starting with Pivot –  will be sent to either GrovePi or GoPiGo, or simply ignored.

PivotPi commands are quite forgiving about the use or non-use of spaces – and that gives you a bit more flexibility. You may enter everything in one line or make use of the JOIN block. Details are given below.

Upper/lower cases:
PivotPi does not care about the use of upper or lower cases. You choose what you like.

Keep this image as reference when you start coding. It’s an overview of all the PivotPi commands which we will detail below. 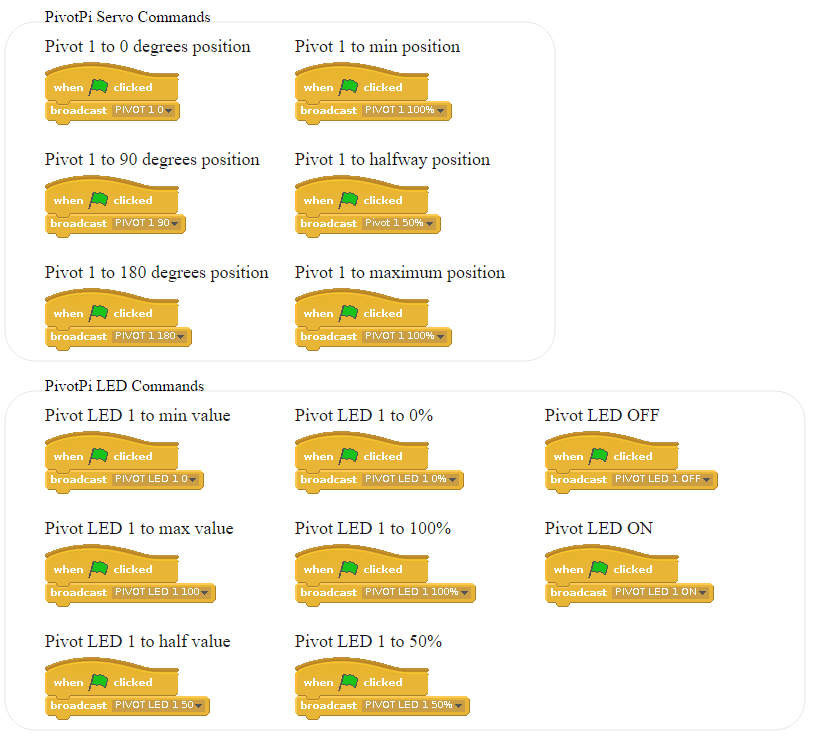 Summary of all PivotPi Scratch Commands

In Scratch we refer to each servo as a pivot. To program the Raspberry Pi Servo Controller in Scratch, we direct what the Pivots are doing.  The two words refer to the same thing but the code will only understand the pivot command.

Here are some block examples:

You can also set the position of the pivot as a percentage value.

If you want to have the position in a variable then you would have to use a JOIN block as illustrated here:

When using the percentage approach, we need to put the ‘%’ sign at the end so  it would look like this:

If you wanted to have the pivot selection in a variable, you would need two JOIN block as follow:

The LEDs on the board are meant to give you some sort of feedback on the status of the pivots but you have to control them directly – or you may wish to ignore them or use them for another purpose completely.

As stated before, every command sent to the PivotPi board starts with Pivot and it’s the same here. The simplest commands to control an LED are:

However you can also set the intensity of the LED. Intensity goes from 0 to 100, with or without the ‘%’ sign at the end.

Projects that have been built with PivotPi and coded with Scratch: 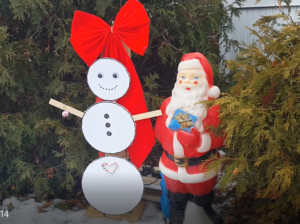 Do You Want to Build a Snowman?

Do You Want to Build a Snowman?

Back to PivotPi Tutorials and Documentation.