Tired of Turning off the Lights? Saving Electricity with the dSwitch and the TweetaWatt

Blog » Products » Tired of Turning off the Lights? Saving Electricity with the dSwitch and the TweetaWatt

Tired of Turning off the Lights? Saving Electricity with the dSwitch and the TweetaWatt

John6:00 amAugust 5th, 2015
Tired of Turning off the Lights? Saving Electricity with the dSwitch and the TweetaWatt 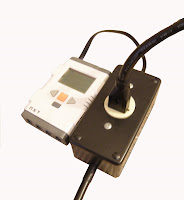 Earlier we posted on how we used some free time over the holidays to make Adafruit’s Tweet-A-Watt project. We wanted to see if we could combine the device with the dSwitch and conserve some energy around the office. We wrote a quick program that “listens” for a human, and turns the lights off if no one is there. The program ended up saving some energy, which over the year, will save some dough. “How much you ask?” Read on . . . 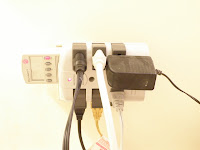 The setup is pretty easy in our office: most of the appliances hook into one socket. Safety first though: I made sure that the dSwitch was properly sized, and the electrical load would not exceed the rated 10 Amps. In my particular area, I have a laptop, a printer, and a few lights hooked up. The laptop converter draws about 65 Watts at most, and I have a 100-Watt incandescent lightbulb, 2 14-Watt CFL light bulbs, and a printer that uses about 72 Watts. Sometimes I use my soldering iron, which draws about 50 Watts.

So my area uses about 315 Watts running at full blast, or about 2.625 Amps at 120 Volts. That gives me plenty of room for safety within the 10 Amp max load of the dSwitch.

I went ahead and put all the plugs into a power strip, which went directly into the TweetAWatt device. You can see a picture below.

Next we hooked up a sound sensor and a dSwitch to our NXT Smartbrick. The sound sensor should be able to pickup the noises of someone in the office: typing, talking on the phone, etc. 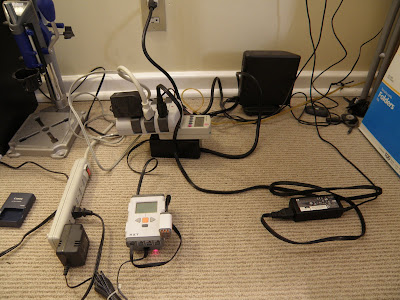 The setup is shown 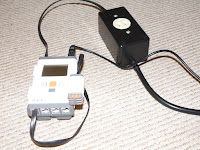 to the left. I put it at my feet, which turned out to be a pretty good distance for catching the sounds of my presence, and not picking up noises from outside.

I wrote a quick program where I could set a timer, the Smartbrick would “listen” over a period of time, and if it detected a sound greater than the threshold for my presence, it would shut the power off until a sound over the threshold was detected. A copy of the program can be found here, and is shown below (you can click on the picture to get a better resolution).

The program works pretty well. Establishing proper noise thresholds was crucial; I spent a lot of time playing with it to get it right. The thresholds depend on the noise in the area, and any noise outside. The dSwitch turns off with the clearing of my throat; an easy way to turn the lights back on if I’ve been reading for a long period. In the setup, I used the NXT’s wall plug to keep the battery charged. I also turned the sleep settings off the Smart Brick.

The first set of data I took was on a typical day; since days are not usually typical, I made sure to start taking data at 9 AM, and stopping at 5 PM; my days usually start earlier and end a lot later. But to keep the data straight, we started and ended at the same time. The idea is to go ahead and sum up all the wattage used over a normal day.

We ran the energy saver program on a typical day. We simply hooked up the TweetAWatt and the receiver and started taking data.

The real-time results are graphed below. The data shows the ups and downs of the day in terms of watt usage. You can see a spike of wattage in the early part of the day as my laptop charges up (charging the battery consumes more electricity than normal usage). As that drops off you seem some drops when I take a bathroom break and step out for a phone call. Lunch is the big drop; when I take a half hour off about 12:00 to 12:30, the voltage drops as the dSwitch turns off the office. You can see a few more breaks during the day, and a spike of around 50 watts around 15:45 when I turn on the soldering iron. 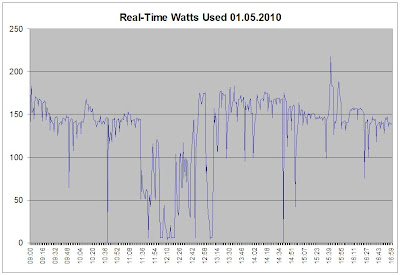 Let’s make the data from our setup mean something. To do that, we need some baseline data: what does a typical day without the setup look like? Let’s see what the wattage looks like on a typical day. 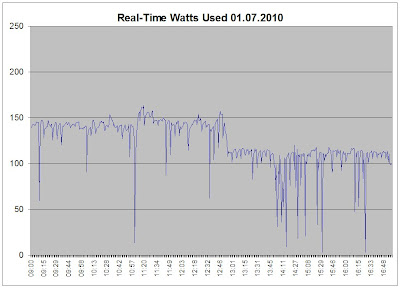 Oops . . . that’s not a typical day. Or it’s a little bit off. What happened? I took my laptop into another room to work after lunch, left the lights on. You can see a pretty clear drop there after about 12:45. So this isn’t really good baseline data. 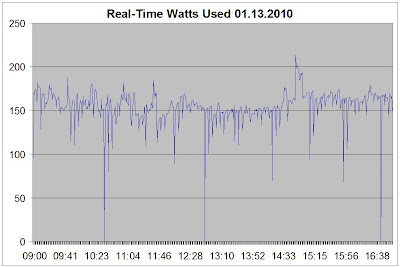 We got a pretty good read here. We get a pretty even average wattage consumption around 150 watts. Later in the day, about 14:45, I turned on the soldering iron. You can see the spike. Looks like we have some decent baseline data. The final numbers for the data are . . . .

All of the raw data from the experiments can be found in an Excel sheet on our website here.


Let’s look at the raw data first. By using the dSwitch, on an average day we saved:

In a year (assuming I don’t work weekends) we save:

That’s quite a bit of savings for the grid (energy), the dough (my wallet), and carbon (the environment).

Some appliances don’t cycle well. We mentioned the refrigerator above, and that could lead to a disaster. A little less painful is hooking your internet router up. Or desktop computer, or printer.