Humans have been brewing beer for thousands of years.  Crucial to quality brewing is temperature control.  Two typical steps in the process are steeping grains and the boil.  Both steps require strict temperature control; getting it wrong can make a mess, and even more tragic, destroy the beer  Learn more about how to avoid tragedy . . . 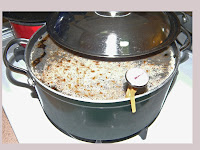 While you can learn more about brewing beer here, we’re going to focus here on controlling the temperature during the brewing process. Most breweries have very sophisticated equipment to control the temperature of their brewing.  Homebrewers usually don’t.  The NXT, combined with the dSwitch, a thermometer, and a hotplate, make an excellent temperature controller (see the Plastibots blog for another great example of using the dSwitch for temp control).

There are at least two steps in simple brewing where the temperature is critical.  The first step is steeping, where a grain is heated to temperature, about 65 C.  This step is less mission critical:  the grains can burn, but as long as it’s not boiling, we’re still good.  Still, the brewing requires some attention.  And it’s not fun to keep checking the temperature and adjusting the gas flame every few minutes.  You can see our steeping on the right.  Every few minutes, we check the temperature.  This goes on for about 30 minutes or so . . . 30 minutes of your life you can never get back. 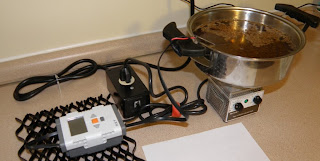 Steeping with the NXT-dSwitch combination was easy.  We wrote a crude program in NXT-G, set the temp to 65 C, and walked away.  We watched the Superbowl or something.  I forget, but it was 30 minutes.  Plug, play, walk away.  We used a beta version of a temperature probe we’re developing (coming soon!) to monitor the temperature.  And an NXT-G Block we wrote for that temperature probe.  The program is to the right.  To set the target temperature, we simply set the number (in Celsius) in the comparative block.


The second temperature-critical step in brewing is “The Boil”.  This is where things get interesting.  The brew has to be brought to a boil, ingredients added, and then maintained at a boil for almost an hour.  The purpose is to bring everything into solution, disperse for taste, and make the brew sterile.  Here’s where it can get really dangerous: the brew needs to boil (in part to kill any bacteria that might compete with the yeast), but it can’t boil over.  The brew must be kept at boiling, and not over.  A worst case scenario: you over boil the pot, you lose some future beer, and hardened burned sugar lights on fire and coats the stove-top when your wife gets home (Sorry). 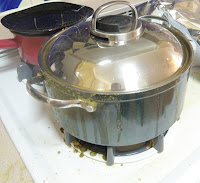 Our stove is a natural gas burner.  The results are on the right.  No matter how attentive we were, the brew boiled over more than once.  You can see some of the damage; the pot is hiding the big black burned sugar chunk underneath.  It took an hour to clean up.  We were almost banished from the kitchen.

On the other hand, our boil with the NXT dSwitch combination went smoothly.  Even beautifully!  The only thing we had to be careful of is that our lab (OK, in this case, kitchen) is about 2,400 meters above sea level.  So water boils here about 95 Celsius.  So again, we plugged the NXT in, changed the target temp, setup the boil, and read a good book.  The second best part: the table was as clean as when we started.
And because we’re engineers, we took some data.  The program records temperature every ten seconds, in Celsius.  Just for fun, we graphed it.  And analyzed it.

Looking at the full set of data above, we see that we approached the temperature (not very smoothly), and maintained it.  After we got up to temp, how well did we maintain the temperature?

A slightly bigger closeup: our temperature bounces around the boiling temperature, and always maintains it within 3 Celsius, but mostly within 1 Celsius.  Pretty decent control . . . 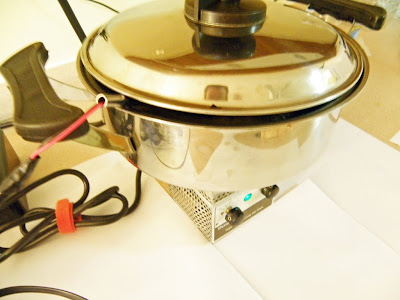 Conclusions . . . We’ll see how the beer turns out in a few weeks.  The proof is in the consumption.  Next time we do this, we’re going to use the NXT and only the NXT.  Even though the program we wrote was rudimentary, it kept the temp in place pretty well, and didn’t allow the beer to boil over.
This is kind of a big deal; for cooking, for the lab, and for engineering.  With the simple control program, we can keep the temperature within a degree or two.  With better software (PID control), we can tune the hotplate even more precisely.  Setups like that cost $1,000 – $2,000 for the lab; more if you want to see and store the data.

Tags:dSwitch, lego, mindstorms, nxt, temperature
0
Natural Log Iterative Calculation
Tired of Turning off the Lights? Saving Electricity with the dSwitch and the TweetaWatt