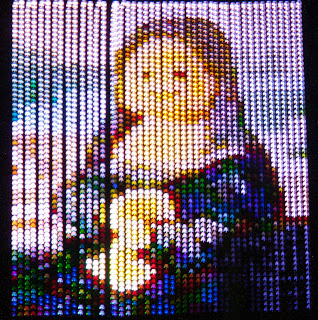 This week we learned about two amazing projects with the dLight LED system for the LEGO Mindstorms NXT.  One is a high-tech indoor GPS system, the other is high art created with the dLight.

The first project this week was developed by Aswin, co-inventor of the dLight.  The project allows NXT’s to “localize” indoors, just as they might with a GPS sensor, but more accurately.

I created a robot that uses the same principles as the GPS system is based on to localize itself. Instead of GPS satellites I use  blinking LEDs (dLights from Dexter Industries) as beacons. The beacons are detected and identified using a standard NXT light sensor.

Aswin walks us through his project on his blog, and even has a cool video showing the robot in action.

The second project this week was developed by programmablebrick.blogspot.com/ .  This project uses the dLight and a long exposure camera to make some beautiful art.

I built a robot that moves a LED around a grid and then turns on the LED to the desired color at each location on the grid.  I used my DLSR to take a very long exposure while the robot is moving the LED around the grid.   The end result is a photo of the LED at all of the various points in the grid which (hopefully) looks like the image the robot is trying to reproduce.

Judging by the pictures and the video, the experiment worked.  These are some really beautiful pieces of art produced, a Van Goh and a Mona Lisa.

Here’s the video detailing the work done and how the rig was setup.